I have imported this blog to Wordpress to avoid having the blog blocked by my school.  I'm still trying to see if I can import my followers, but because I am using Wordpress.com instead of Wordpress.org I can't seem to make it work.

In the mean time I hope you will join me at the New Booklady's Booknotes.
Posted by Booklady at 12:04 PM No comments:

If I Move To Wordpress Will You Still Follow?

This first full week of summer vacation has been spent in professional development.  Yesterday's class was all about blogging.  I've been blogging for a couple of years, but wanted tips on how to do it better, as well as getting tips on how to use blogging with my students. Got some great ideas, but found out that I will not be able to use blogger with my students.  Something about not being able to restrict searches on blogger and therefore not being able to keep the appropriate level of safety/privacy for students.

I totally understand the reasoning.  I've already moved my school library related blog over to the D20 Wordpress site. You can find it at Mrs. Archer's Book Notes.  I have strict privacy settings on it - i.e. all comments have to be approved by me before they are posted.  This blog is not school related, but covers books of all genres and ages.  However it does have information that I like to share with my staff.  If I keep it on blogger, they won't be able to access it from school.  Educators are busy.  If I send them a link to a blog post they might find useful, then tell them they can't look at it until they get home, chances are they'll have forgotten about it by the time the get home.

After the recent Splash Into Summer Blogger Hop Giveaway, my followers jumped up to 149. I was very excited about this.  Though I'm sure many of those new followers only signed up for a chance to win the Amazon gift certificate I was giving away. Still, I worry that if (when) I move to Wordpress, I'll lose those followers.

Another advantage to moving this blog over, would be having everything on the same dashboard. Of course that would mean I'd also have to move my Breast Cancer and Photography Blog as well.

The Goddess Test by Amiee Carter 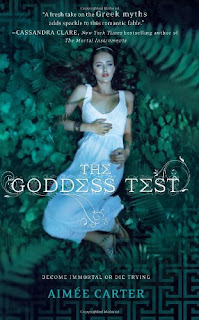 I received an e-galley of this book from Librarything's Early Review program.

Summary:  It's always been just Kate and her mom—and her mother is dying. Her last wish? To move back to her childhood home. So Kate's going to start at a new school with no friends, no other family and the fear her mother won't live past the fall.

Then she meets Henry. Dark. Tortured. And mesmerizing. He claims to be Hades, god of the Underworld—and if she accepts his bargain, he'll keep her mother alive while Kate tries to pass seven tests.
Kate is sure he's crazy—until she sees him bring a girl back from the dead. Now saving her mother seems crazily possible. If she succeeds, she'll become Henry's future bride, and a goddess.
I love good books with a take on mythology. So this was a good read for me.
What I liked about the book:  1.) Kate. She's a strong character, very well developed.  Life has been tough for Kate. Her mother is dying. She's moved to a new school.  She makes a new friend (though an unlikely one) only to have her die.  Instead of whining about how life has mistreated her, Kate sets out on a course to try to make things right and to try to save her mother.  Kate is not your stereotypical spoiled teen.  2.) It's a modern twist on Greek mythology. (Did I mention how much I like mythology?).  Granted Carter has put her own spin on the Greek Gods, but that actually makes the story better. I like how she thinks outside the box.  3.) It's not your typical paranormal romance.  Don't get me wrong, I enjoy a good vampire/angel/werewolf romance, but it's refreshing to find a well written different take on the paranormal romance.
What I didn't like about the book:  There really wasn't anything I didn't like about the story. If pressed, I would say I might have liked it better if Kate didn't take so much blame on herself. She feels guilty  about what happens to Ava and she even feels guilty when she has to pass judgement on her.   Yet, I can't really say this is a bad thing about the book. It's part of what makes Kate who she is.
If you enjoy books about mythology and a you enjoy the teen romance, this is a good read for you.
Posted by Booklady at 5:49 AM No comments:

RAK is hosted by Book Soulmates. Its a way to pass on the book love.
May sure went by quickly. I didn't receive any RAKs this month. I only sent out one RAK this month. I hope to be better about it in June. I'm such a book geek and I love sharing books with others.  I guess that's one of the reasons I'm a librarian.
So, here is my WISHLIST for this month.
If you want to participate this month sign up is HERE.
Can you believe it's already June?!
Rules:

• Sign up each month you'd like to participate in.
• Show off your participation! Grab one of the buttons available :)
• Create a wishlist and post it in the Google Doc located in each R.A.K post for the month.
{Post on your blog, Amazon, where ever as long as there's a link to it.}
• If you choose to do a R.A.K for someone, check out their wishlist and contact that blogger for their address.
• At the end of the month, SHOW US YOUR R.A.K!
{Make a post saying 'Thank You' to whoever granted one of your wishes :)
Happy Summer Reading Everyone!
Posted by Booklady at 4:58 AM 1 comment: 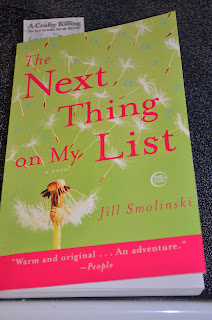 June Parker gives a ride to a stranger and it changes her life.  The passenger, a young woman named Marissa, is killed in a freak accident, leaving June feeling responsible.  When returning Marissa’s purse to her grieving family, June discovers that Marissa had a list of things she wanted to accomplish by her 25th birthday.  June decides that she will finish Marissa’s list for her.  Kissing a total stranger, going braless, and eating ice cream in public are the easy ones.  Changing someone else’s life will be the challenge. Yet, June, with the help of friends and co-workers tackles the list with determination.  As she marks things off her list, she discovers it just might be her own life she changes.
My book club (The Pikes Peak Bookworms) selected The Next Thing On My List because we wanted a light read after having read two rather dark selections.  It was certainly a light, quick read.
What I liked about the book:  It was easy for me to connect with this book because I am working on my own Life Celebration list.  It’s a feel good story – a welcome break after the rather somber reading I’ve been doing the last several months.  The pacing was just perfect for a summer beach read. And though the book does make you think about your life and where it’s going, it’s not so deep that it feels like “assigned reading.”  Smolinski has a light, witty writing style that will appeal to most readers, especially those who enjoy “Chick Lit.”  The author includes discussion questions at the back of the book along with activities to help readers create their own list.  Since this is a book club read, I found this to be rather helpful.
What I didn’t like about the book:  I didn’t like the romantic twist at the end. Not that this takes away from the book.  It just didn’t end the way I expected or had hoped.  However, upon reflection, Smolinski did include clues about where the romance was going. I just failed to pick up on them.
If you enjoy Chick Lit or if you are looking for a quick, easy read for travel or the beach, this is a book you should slip into your travel/beach tote.
The Pikes Peak Bookworms will be discussing this book on June 6th. I’ll let you know what the rest of the group thinks.
Posted by Booklady at 5:44 AM No comments: 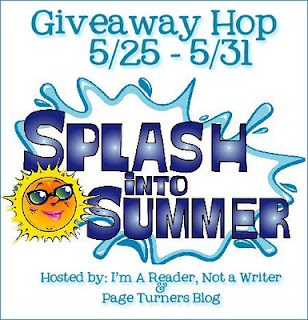 The winner of the $25 Amazon Gift Certificate is Kim The Book Butterfly.
Thanks to everyone who entered. I am working on compiling everyone's favorite summer reads for a future post.  Happy Reading!
Posted by Booklady at 5:05 AM No comments:

ARC Review: The American Heiress: A Novel by Daisy Goodwin 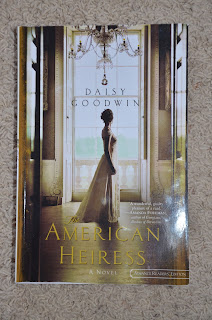 I won an ARC of this book from Goodreads.
The American Heiress tells the story of Cora Cash, a wealthy young American beauty from the turn of the Twentieth Century.  The only child of a “new money” family,  Cora is her mother’s entrée into society.  Mrs. Cash is determined to make the ultimate marriage match for her daughter – one with a title.  On a trip to England, Cora finds herself in a whirlwind courtship with an impoverished duke with secrets.  After an over the top wedding, Cora finds herself trying to navigate the pitfalls of being American among British nobility.  For once, her wealth can’t solve everything.
To be honest, I’m still trying to figure out how I feel about this book. I thought it was well written.  Godwin included just the right amount of detail to give the reader a sense of the time period.  I found Cora to be a very likable character. I was very interested in her story and wanted to know how it would end.  However, I had a real hard time reading this book. I kept finding it way too easy put it aside.  In the end, I had to force myself to sit down and not move until I finished the book.  In fairness, that could be due to the fact that I would classify this book as a romance, not a genre I read very often.
What I liked about the book: Cora. She’s a very strong woman, but not so strong as to be unbelievable.  She is the reason I kept reading.  The setting – I’m an Anglophile and I enjoy stories with a British or Irish twist.  The ending – I won’t post any spoilers, but I have to admit I was a little concerned about how she was going to wrap it all up – would it be believable.  It wasn’t a Pollyanna ending, but it fit the story rather well
What I didn’t like about the book: There were several characters I didn’t like, but I don’t think the reader is meant to like them very much.  There is more than one villain in this story. The main thing I did not like about this book was the pacing. It was a good story, but it just didn’t grab me. It often felt like a chore to read this book and that is why I only gave it three stars.
If you enjoy romances, stories about turn of the century England and are not looking for a fast paced, grab you by the collar read – then this could be the book for you.
Posted by Booklady at 6:13 AM No comments: 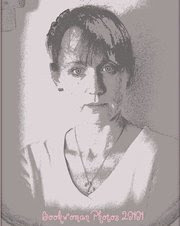